Together with her husband, Anders, Gladys and three other members founded Westside 1990. Gladys went to University of Toronto for her bachelor's degree in Linguistic. During her university years, she received her call into full-time ministry. She returned to Hong Kong upon graduation and attended China Graduate School of Theology. As she finished her Master of Christian Studies, God led her into chaplaincy ministry at Carmel College, a Christian high school in Hong Kong. In 1986, she attended Regent College for her Master of Divinity and Master of Theology. Amidst one of her assignments, she wrote a church planting project which caught the attention of BUWC. In 1990, Gladys was commissioned by the BUWC to plant an ethnic church in Vancouver. While pastoring Westside, Gladys continued to pursue her quest to be a better leader and pastor at Fuller Theological Seminary. She completed her Doctor of Ministry in 2002.

Gladys favorite past time is reading and listening to music. She is a connoisseur of fine tea and coffee. She likes to taste all sorts of tea and coffee from different parts of the world. 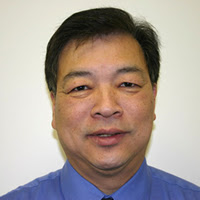 Anders met Gladys while they were teaching at Carmel College in Hong Kong. They were happily married for 20 years but have no children. In 1986, while Gladys was studying at Regent, Anders was pursuing his graduate studies at UBC. Anders started his career in Canada as a realtor as God called his wife into planting a church. With great commitment to the Lord and flexibility in schedule, he was actively involved in the ministry of Westside as a lay leader. Things went well and they work out as a fine team until 1999. God had other plans for He reminded Anders of a long extended call to go into full time ministry. It was a call which he had responded in his youthful days. Without further delay, Anders finished his Master of Divinity at Regent College in 2000 and transitioned into a staff position at Westside. Serving in unity with his wife as a team, Anders is committed to small group ministry and is passionate about worship. They are both key ministries at Westside.

Alan is Assistant Pastor of Westside Baptist Church in Vancouver, BC. Among many pastoral responsibilities, he focuses on family, youth and children ministry in the Cantonese congregation. Before joining the pastoral team at Westside, Alan was the Director of Ministry (Western Canada) at Ambassadors for Christ in Canada for many years. With his background in creative work, Alan initiated many innovative student discipleship programs at AFC, including the popular PP959 radio broadcast and web ministry, Adventio worship discipleship ministry and the caring ministry through the Cooking Studio at RoomC.

Alan immigrated to Canada with his family from Hong Kong in his teenage years, and graduated from the University of British Columbia with a degree in Civil Engineering. He then continued his study in the United States and Denmark and obtained his master degree in Architecture. After returning to Vancouver, Alan studied part-time at Regent College while practicing architecture and receive his Master of Christian Studies, majoring in Marketplace Theology and Applied Theology. He later received his doctoral degree in Worship Studies at the Robert E. Webber Institute for Worship Studies for his research in the interaction between worship and discipleship. Alan also received his Doctor of Ministry degree at Fuller Theological Seminary studying spiritual formation and healing. Alan is currently continuing his study at Fuller in Willardian theology and Ignatian spirituality.

Alan with his wife Constance have three sons Alpha, Archer and Aslan.